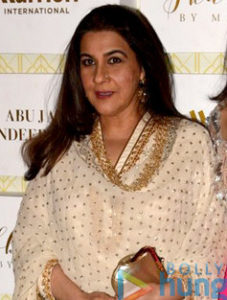 She is playing a role in upcoming movie Badla with starring Amitabh Bachchan, Tapsee Pannu and Tony Luke. Badla is releasing on 8th March, 2019.

Amrita Singh was to born to a muslim mother Rukhsana Sultana and a Sikh father Shivinder Singh Virk ( Army Officer) from a feudal family. Rukhsana was a political associate of Sanjay Gandhi during the Indian Emergency in the 1970s. Through her parental grandmother Mohinder Kaur, Amrita is the great-granddaughter of Sobha Singh. The actress Begum Para is her aunt. The actor Ayub Khan is her second cousin. Amrita attended her schooling in Modern School, New Delhi. She is fluent in English, Punjabi and Hindi.

Some Facts about Amrita Singh